The antique business card is a glimpse into the trades and advertising methods of their time. There are some fascinating items to note on this little slice of history. There is a lot to be gained by finding little historical treasures such as this. To make your own business card one such treasure, Vistaprint coupons from http://businesscarddesignreviews.com/vistaprint-coupons/ will give you the quality and price you need to make your company remembered for all of the right reasons.

As with other cards of this era, we see a type of crest flanked by medallions. The crest is an eagle sitting on center stage with the theater curtains dramatically drawn back. It is topped by a regal crown.

To the left is a medallion from France, 1855, featuring Louis-Napoleon Bonaparte, Napoleon III. The medallion to the right is from Belgium in 1857 and features King Leopold the First.

Centered across the card in bold, shadowed letters is the name of the business with the word “photographers” just below. The following line, in a stylish outline font adds, “of S. M. Empress.” Here they are refering to Napoleon III’s wife, Empress Eugenie, Countess of Tejo.

Related distantly to both a King Spain and of Portugal, she caught Napoleon III’s eye at a reception at the Elysee Palace, his residence. Raised and educated in Paris, she refused Napoleon III’s advances until marriage.

Needing an heir, and under the threat ot Eugenie leaving Paris, Napoleon III proposed. They were married in 1853. In 1856 Eugenie gave birth to a son, Napoleon IV. Hereafter Napoleon III resumed he extramarital dalliances with other women. Ah, les français!

It is interesting to note that Eugenie was very much interested in women’s causes. For example, she put pressure on the Minister of Education to award the very first baccalaureate diploma to a woman.

Returning to our business card, the information ends with address of their studio at the bottom.

We recently reviewed an A+ old timey card, whereas this one is more of a B. It follows the common style of the period, mid 18th century, but with less panache–and less braggadocio–than others we have seen. 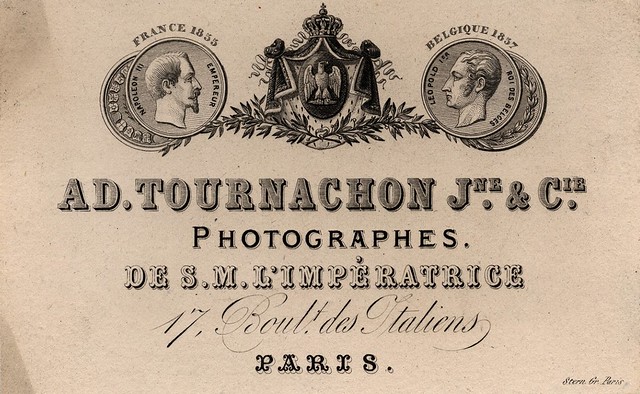